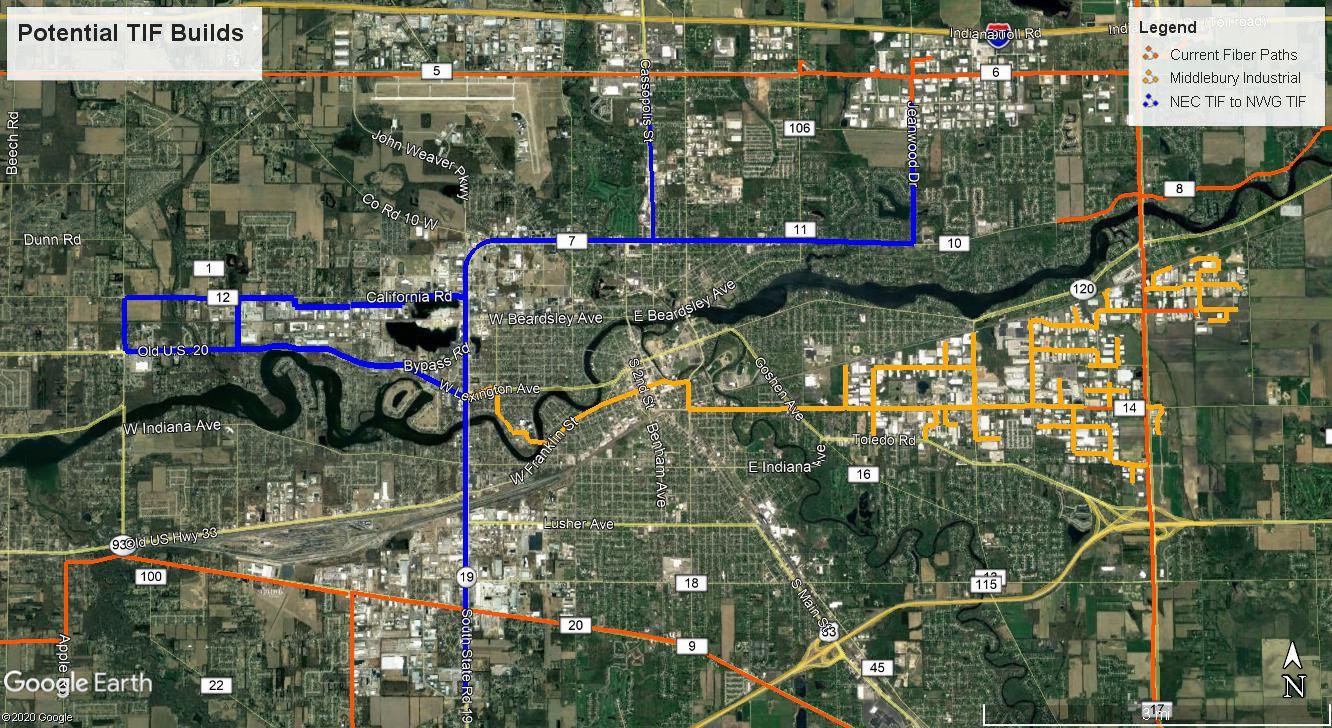 Board members voted to appropriate $3 million and $10,000 from two special taxing districts toward the installation of backup fiber lines, in preparation for putting the two projects out for bids. The work is part of an estimated $7 million worth of installations planned for the Elkhart area in the next few years.

They authorized the money Thursday during a meeting held over videoconferencing. Their share of the money comes from two tax increment finance districts that border the city.

Natasha Kauffmann, redevelopment program coordinator, said they were asked to contribute funding toward one part of the larger, long-term fiber goals held by the county. The plan prioritizes public and commercial users but will eventually reach residential customers.

She remarked on the sense of urgency behind the fiber builds.

“These are projects that are, because of the way that the fiber team is focusing their work, they’re trying to get as much built in the next two, possibly three years, as possible,” Kauffmann said. “So these aren’t amounts that they’ll be asking for us in the next four or five years – they’re asking for our help now, up-front, because they’re trying to get as much infrastructure built now, as we’re really seeing a need for digital connectivity in these times.”

She said one project area is the Middlebury Street industrial area off C.R. 17, estimated to cost about $1.5 million. The other is a redundancy build connecting the county’s Northeast Corridor and Northwest Gateway TIFs, estimated at just over $1.5 million.

“And that helps to not only connect between the two TIFs, but it allows so that there’s a redundancy loop for the overall system going through,” she said of the second project. “It will also allow, over time, for the county to have more users of the county dark fiber over time in that area. This is a county asset being built within the area of Elkhart City and overlapping with areas of county jurisdiction.”

Elkhart County has been expanding its fiber network in recent months while also developing the infrastructure needed to manage it. That includes writing new policies for companies that lease strands of fiber and hiring staff to oversee daily operations.

Ben Miller, who was hired as dark fiber consultant for the county, said they’re preparing to deliver monthly reports to show things like the number of subscribers, usage, growth and revenue.

He noted that about 38 miles of fiber will be installed between the two projects that the RDC was asked to help fund.

That includes 20 miles going along S.R. 19, from Jeanwood Drive in the north to just past Mishawaka Road in the south, with a loop at California Road and Bypass Road. Another 18 miles will go into the Middlebury Street and C.R. 17 industrial area.

He explained how the build-out will benefit some City of Elkhart and county facilities, as well as making it possible for more users to connect in the future.

“We have a lot of customers that have approached us, potential users that want to use dark fiber directly, that are on the commercial side. There are some new internet service providers who want to start providing service in those areas, and they have asked us as well,” he said. “We also are rolling out a plan for small businesses now, not just the medium to large commercial customers.”