Ivy Tech’s new iFlex Lab will be located immediately east of the existing building on the Elkhart campus. (Artists rendering)

Construction is under way on the new Ivy Tech iFlex Lab, a facility that will help transform Elkhart County, Ind., and make the area a national leader in advanced manufacturing, according to reporting by Rasmus S. Jorgensen in The Elkhart Truth. as well as a video report (above) by WNDU.

That was the consensus Wednesday morning (Sept. 10) at the official groundbreaking on the Ivy Tech campus in Elkhart, where leaders from the community college and the community at large celebrated the impact they foresee, as well as how fast the project, proposed last summer, is moving.

The iFlex Lab, located immediately east of the existing Elkhart campus building, will allow Ivy Tech to embrace new technologies that local employees will need to learn for Elkhart County to lead the nation in manufacturing, according to several speakers. One of those speakers was U.S. Rep. Jackie Walorski, R-2, who spoke via video link.

“By the charge of who we are, we obviously want to lead and not follow when it comes to manufacturing, and the iFlex Laboratory is right on point to be able to do that,” she said. “Our present and future workforce will require advanced technical and computer skills to remain second to none.”

The threat automation poses to workers is real, she said. But by embracing technologies such as mechatronics and robotics, the local workforce can stay ahead. 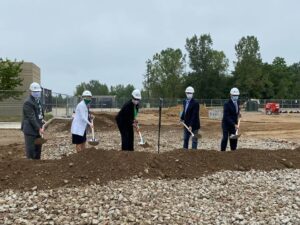 Ivy Tech’s new 10,000-square-foot facility will offer training for people seeking to follow those and other paths, including industrial maintenance and computer-aided design. The space will also allow Ivy Tech to “flex” over the next 10 to 15 years and become more future-focused, especially as Industry 4.0 and the “internet of things” expands.

Construction of the iFlex Lab is estimated to cost $3.8 million. The Community College has received funding for the project from multiple sources, including the tax increment finance fund of C.R. 17 and C.R. 6, from which the project received $1.47 million. From the Labs for Industry Futures and Transformation (LIFT) Network, funded by the Lilly Endowment, the project received $1 million.

The hope is to have the facility fully operational by the fall of 2021, according to the chancellor for the South Bend-Elkhart campus, David Balkin. Meeting that goal has required the community college and its collaborators to work at an unusual speed, he said.

“No Ivy Tech building, since the founding of the college in 1963, has been conceived, designed and constructed faster than the one that’s going up behind you,” he said. “We’re moving so fast, I’m thrilled that we’re able to squeeze in this groundbreaking before the building opens for classes.”

Elkhart County Commissioner Suzie Weirick praised the collaboration between the many involved community stakeholders who all see the need for keeping the local workforce ready for the future.

Elkhart County, known as the RV capital of the world, is dependent on RV manufacturing to a point that many local leaders share a belief that the local economy must become more diverse. The RV industry offers many employment opportunities in good times but was hit hard during the Great Recession, resulting in high unemployment rates locally. Weirick said that, with the workforce being developed at Ivy Tech’s new facility, Elkhart County will further its ability to attract new businesses, which should result in a more diverse economy.

Ivy Tech President Sue Ellspermann said the project is not just about the community as a whole, but also the individuals who will come through the iFlex Lab programs. “Together we really are changing lives, one student at a time, while building a stronger workforce, stronger industry, stronger employers, stronger local economy,” she said. Though construction had already begun, officials “broke ground” for the new iFlex Lab at Ivy Tech in Elkhart on Wednesday.