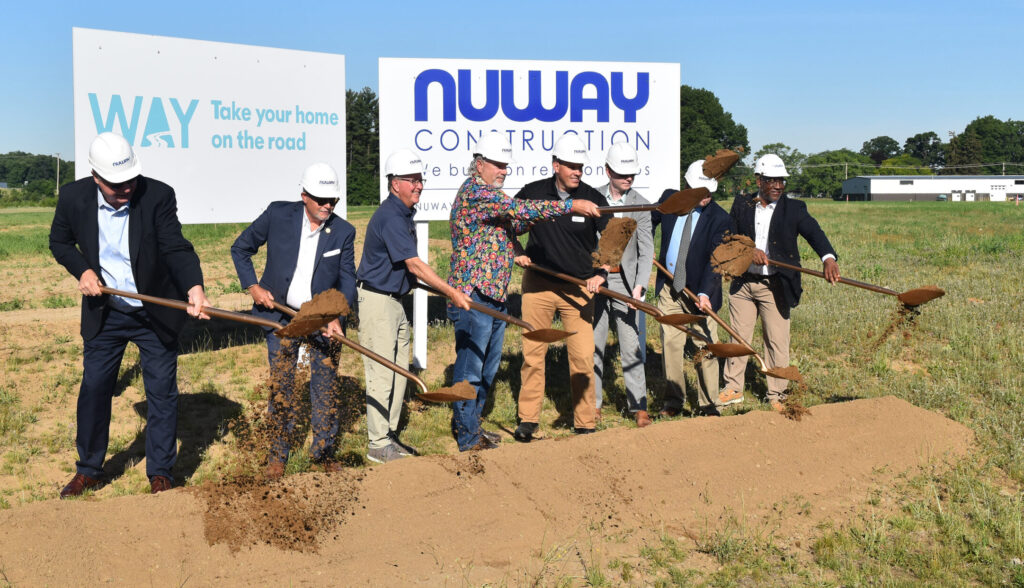 Leading RV supplier and distributor WAY broke ground today (June 17) on what will become, at 800,000 square feet, one of the largest buildings ever constructed in Elkhart County, Ind., where the company will combine all of its operations under one roof.

“It’s kind of a landmark of 35 years,” said Wayne Kaylor, WAY CEO. “Very exciting for WAY as a company, and a stepping stone for the next great things that we’ll be bringing to market. It’s a culmination of a lot of hard work and we’re very excited for today.”

Completion of the building, at 22244 Innovation Drive, Elkhart, is expected by the third quarter of 2022. The location is just north of I-80 and just west of Elkhart County Road 17. 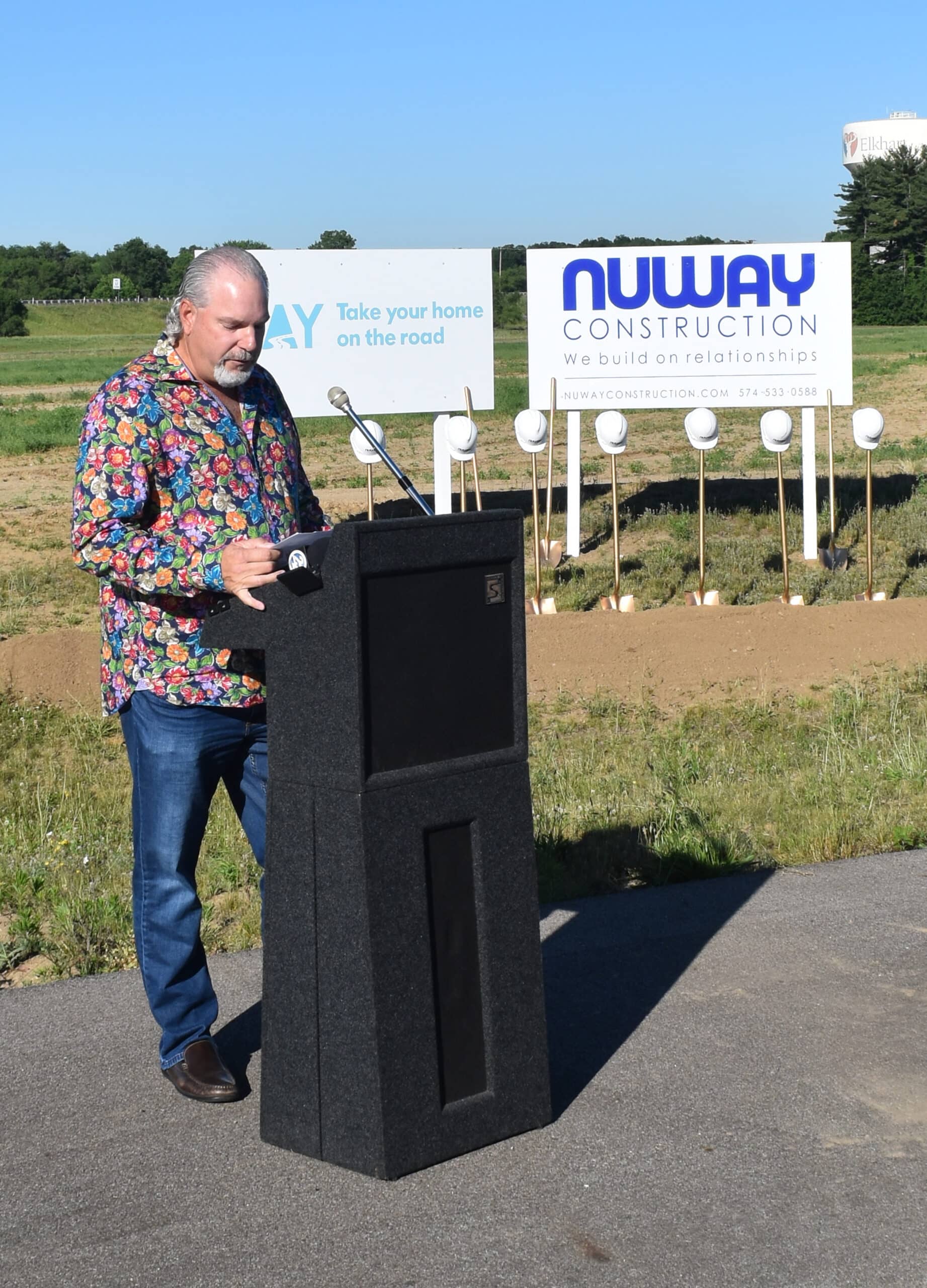 During the ground breaking, Kaylor expressed gratitude to all those who attended the event to commemorate “this brick-and-mortar milestone.”

“We’ve been busy planning for the future and today begins the realization of that process,” he said. “I would like to thank the WAY team first and foremost for all the hard work they put in day in and day out in the office, warehouse and on the road to our customers. I would like to thank our customers for the commitment they show to WAY and our business partners that made this event possible.”

He also thanked the dignitaries and government officials in attendance for their support of the project, along with Nuway construction for its role in making the project a reality.

“I think back to when we began WAY in 2009 and how far we have come. We started with the mindset we could serve a growing RV industry, helping manufacturers provide high-quality products, and we built on this ever since,” Kaylor said. “My team and I strongly believe in the RV family lifestyle and the great benefits it provides. Through our persistence and dedication, we find ourselves on the brink of something very special.”

He said the event confirms the notion that WAY is here to stay, and that it has been growing rapidly by expanding product lines and adding great people to its team.

The next step, he said, is building the kind of space that will allow WAY to continue expanding its industry footprint.

“Our new headquarters is a commitment to our customers, but also to the region where many of us live and work,” he said. “We’re proud to call Elkhart County home and will long do this into the future.”

In addition to two locations in China, WAY currently operates two facilities in Elkhart and two in Niles, Mich., for a current total of 400,000 square feet. The new facility will double WAY’s existing capacity.

The expansion was driven by growth, and Kaylor said today WAY plans to expand its workforce by more than 30% in the next few years. That growth not only benefits WAY, he said, but also the Elkhart County region by providing more opportunities. 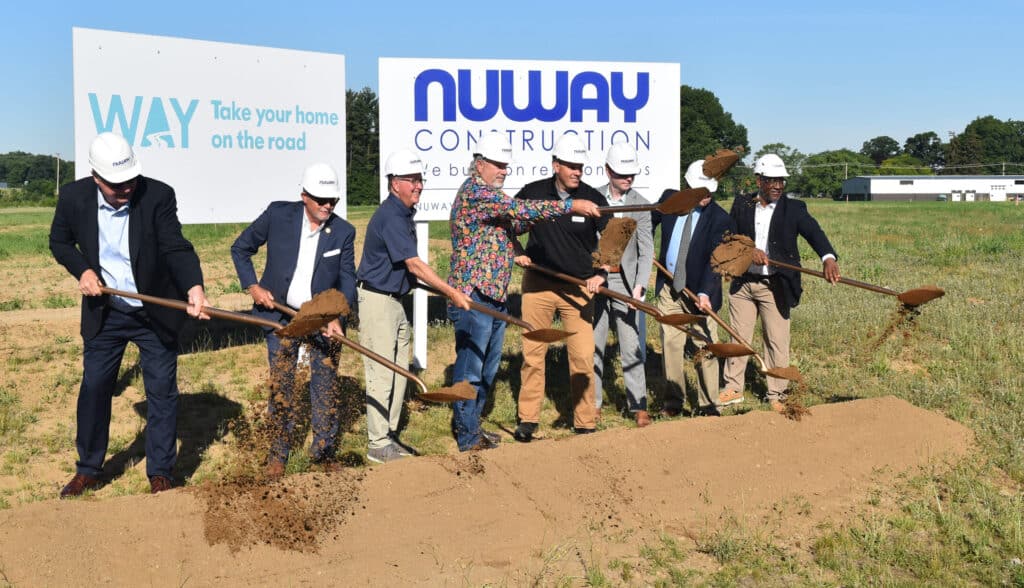 “While today is the beginning of this exciting journey, we laid the foundation for this day long before the shovels ever broke the ground,” he said.

“I am absolutely excited about this project,” said Levon Johnson, president of the greater Elkhart Chamber of Commerce. “The city is excited about it. The opportunities that arise here and the investment by WAY into this area is absolutely appreciated. We will do anything that we can do at the Chamber to help continue the growth that WAY is committing to, especially as we think about the people who will be working in this state-of-the-art facility.”

Andy Nesbitt, president of Nuway Construction, characterized the project as “huge” for his company. “It’s one of the biggest buildings ever built in Elkhart County under one building permit. It’s 18.6 acres under one roof. It’s just a really big building and a good project,” he said.

Fred Ramser, Nuway Construction account executive, said he has been working with WAY for the past five or six years on various projects before getting to this point. “It’s exciting to see businesses grow. That’s what we like to do at Nuway, help our customers get to the next level,” he said. “And it’s a big project. It’s the biggest project Nuway has done, square-foot wise. It’s a fun challenge to build something this big,” he said.

Others of note in attendance included: